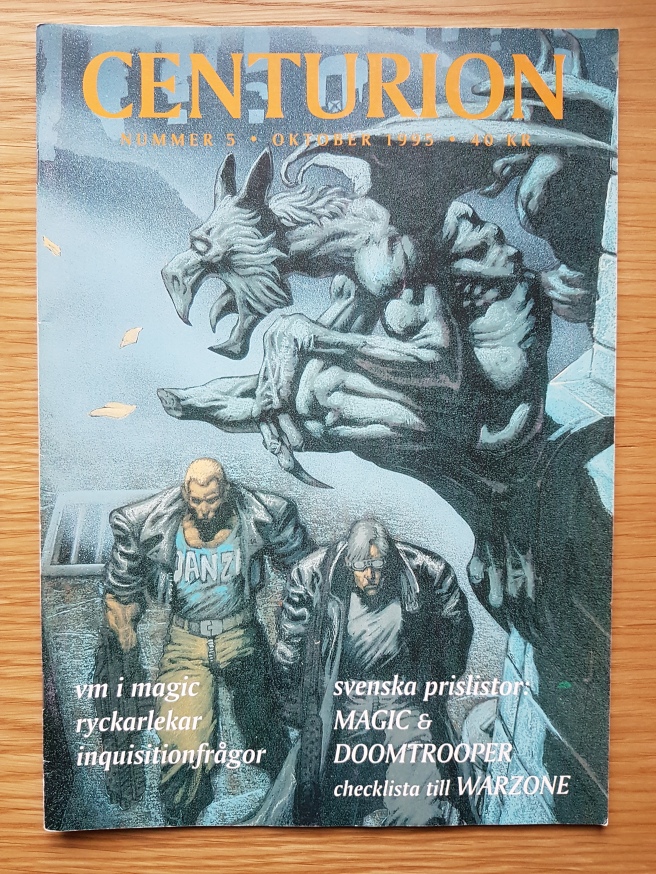 I’ve put off writing about issue #5 because nothing in it really interests me. There’s the same price guide with mostly identical prices as in #4; there’s an introduction to Marvel OverPower and a long FAQ for the newest expansion for Doomtrooper; a guide on how to build budget mono-black discard, similar to the treatment of R/G aggro in issue #4 (hint: it sucks, Mindstab Thrull being one of the better cards in the list), a review of Chronicles (Erhnam Djinn is a good card! So is City of Brass! But not Giant Slug!); an article about nonbasic lands (also surprisingly correct; Library is broken, as is Strip Mine, and Tabernacle is heralded as the big thing in mana denial decks); and some terminology for Magic drinking games (Mahamoti Djinn is 5-6 different kinds of gin in a beer glass, Berserk is 20 beers, Leviathan is 200 litres of water, Firebreathing is a Bloody Mary with extra tabasco) …

There is, however, one substantial article, and that is about the 1995 World Championship. As you all remember from last time, Dan Hörning won the 1995 Swedish Nationals, thus qualifying him and the rest of the top 4 of that tournament for Worlds. The Swedes going were Hörning, Leon Lindbäck, Neil Guthrie, Kim Hassellund, Johan Nilsson, Johan Disenborg and Johan Andersson. (Who can say the Swedes don’t have sense for diversity in names?) The format was Type 2 again, this time consisting of 4th Edition, Fallen Empires and Ice Age. (Smallest standard format ever?) Poor Hörning; his Nationals-winning deck, built around Blood Moon and Channel, was not close to being legal. Instead, he plans to play B/W discard, until finding out on the plane, after careful playtesting, that he lost all three games to UW control. Time to start thinking for real. He had played too much “normal typ 1 gaming” and neglected type 2. Oh, the times.

Worlds was played in Seattle, at WotC, where the players were given a guided tour of the headquarters. At an information meeting the night before the tournament, they got told they would play five rounds of sealed day 1, followed by five rounds of typ 2 the next day, before a cut to top 8. Apparently that information wasn’t given beforehand. The sealed deck format, however, was a bit odd: the product consisted of two 4th ed. starters, four Fallen Empires boosters, one 4th Ed. booster, and one Ice Age booster. That is a lot of cards, even considering Fallen Empires is only 8 cards to the pack. Nobody seemed to know very much what they were doing. Hörning writes that his deck “might seem quite mana heavy”, playing 17 out of 40.

In the first round of the day, Lindbäck beats reigning world champion Zak Dolan, who seems even more clueless about the format. None of the Swedes reached any kind of satisfying result day 1. During that night, at a dinner for the players, Hörning decided to play UW control, just like Lindbäck. Classic multi-format tournament practice of choosing decks in the last minute. Two other observations of note about the first day: the swiss here is based on duels, which makes 2-1 a lot worse than 3-0, something that appeared to be quite common in those early years of organized play, and likely creating interesting collusion opportunities. And secondly, at one point time is called in Hörning’s match, leading to both players being awarded a loss. That is some hardcore ID prevention going on, I tell you.

During day 2, Hörning beats a Greek player with mono-blue control with no Jayemdae Tomes, Zak Dolan on RG land destruction, then losing and winning some rather pointless matches. One of the other Swedes distinguish himself by losing every match of the tournament by 1-2. Skillful.

So, who won? Alexander Blumke from Switzerland, running a black-based discard deck with small blue and white splashes. His price was “a lot of cards, a t-shirt and a Hurloon Minotaur jacket”. (Truth to be told, it is a very sexy jacket.) The real story was the success of red-based Black Vise, Howling Mine, Stormbind, burn decks. Necro was legal, but I’m not even sure how good that would have fared against all of those Black Vises; the Black Summer is still one year away.

Anthing else about that Worlds trip? Magic drinking games, the differences between Swedish and US gaming conventions (the players all headed to GenCon some days later), some uninspired type 1 games.

One interesting thing, however, is one casual format mentioned in the report and fleshed out in a small article later in the issue: Alphabet Magic. I’m not much of a casual player myself, have never been, but Alphabet is something I’ve tried and enjoyed back in the days. In short, you build a deck of 40 cards, and no cards other than basic lands can share a beginning letter. So you have to choose between Armageddon and Ancestral Recall, between Black Lotus and Balance, and so on. Everything is restricted, obviously, although I’ve seen later versions of the format where this isn’t true and the decks contain 60 cards. At some Invitational, maybe? Anyway, the format kind of balances itself, and rewards deck building. Maybe that could be something for an Old School version? This is the deck Hörning played:

Is Air Elemental better than Ancestral Recall? (No.) Is Maze better than Mox? Obviously, mono-colored decks are encouraged, which I always dislike; it could possibly be averted by allowing a single dual land as a 4-of (but still eating up an alphabet slot, of course). I somewhat feel like brewing.

That’s it for this issue. The next post will likely be a report on the Scandinavian Championship, held in Arvika, Sweden, the coming weekend, unless I completely embarrass myself there. Make sure to follow me on Twitter @SvanteLandgraf for some live coverage this Saturday. Take care, and may your orbs always flip and hit, unless you’re facing me.

One thought on “Rereading Centurion, issue #5”