For the longest time, I played almost nothing but The Deck. During this period I faced Troll Disco from time to time and I always thought it was a joke at best, a trap at worst. It seemed really bad, lacking powerful plays and full of marginal cards like Drafna’s Restoration. Then I started playing other decks, and I noticed that whenever I saw an untapped Disk at the other side of the table, my chances of winning dropped by a ton. Didn’t matter if I played Atog, or Dreams Combo, or Powerball. When I watched Marc Lanigra pilot a well-tuned Troll Disco list to the top 8 (where he lost to The Deck, if I’m not mistaken) of last year’s Fishliver Oil Cup, and got to talk to him a bit about it, I put it on my bucket list.

Basically, Troll Disco might be incredibly bad against The Deck, but if the deck beats everything else, it could still be tier 1 (except maybe at N00bcon). I wanted to test this, so I sleeved up a version of Marc’s list for the Winter Derby. This one, to be exact: 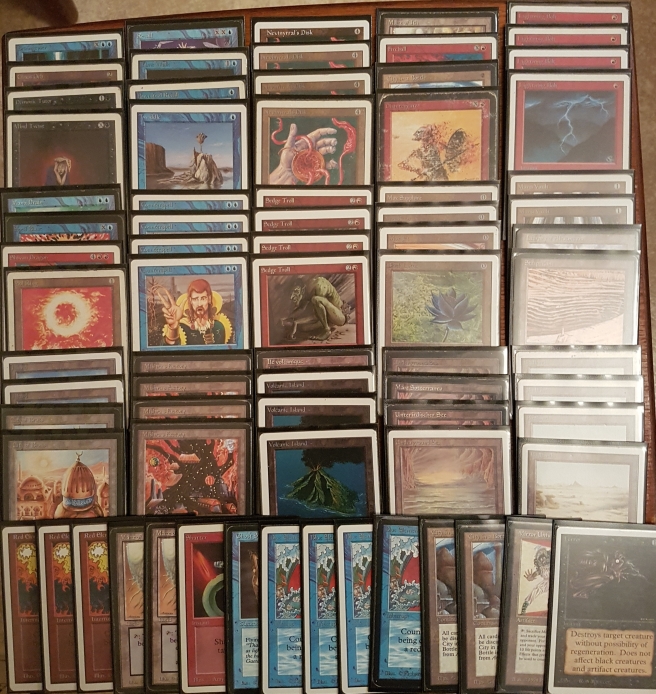 Yes, it’s a horrible photo, but the deck is so ugly that it deserves no better. Especially that 5E Disk, or the mix of beta/unl/FBB (in two different languages) Underground Seas. I just didn’t bother, not knowing how much I even liked the deck. I had played zero games lifetime with any kind of Troll Disco before my first Derby match.

So what’s up with the list? It’s pretty clean, it’s kind of good against Blood Moon (but we’ll get to that later), it’s unaffected by Energy Flux and it runs City in a Bottle itself, and that place on the major hate spectrum is a very good one to be in. It runs two Mana Vaults to power out early Disks, especially while protected by a counterspell, as well as to support the x-spells. The change I did from Marc’s Fishliver list was cutting the second Maze for a Spell Blast, and building a sideboard.

Over to the matches. Because this was played over a period of more than a month, my memory is just as bad as usual. I also didn’t take any notes, so this will be brief.

In batch 1 (the tournament is played in two batches, not as true swiss, as that would take far too long), I faced the following opponents, not in that order but that doesn’t matter. All the deck lists can be found here.

Henk Willemse, 2-1. Henk was on Atog with Howlings. I lost one game to a draw-7 into two more Vises in addition to the one he already had in play. Playing only 1 shatter sb and none main deck, I knew I was a bit weak to Vise. The other two games, I believe I demonstrated how good Disk is against Atog.

Jason Seaman, 2-0. Jason was also on Troll Disco. I was able to use my counterspells to better effort than Jason, getting card advantage in the process, although the matchup is slightly weird, in that it seems to become a troll standoff where the disks become direct damage. I think I won one of these games after stabilizing at 1 life but I might be thinking of something else.

Drew Epstein, 2-0. Drew was on a joke deck, Ball Lightning reanimator with Berserk, Fork, and Mind Bomb. I Twiddled a Ball Lightning once each game. It was never close.

Eric Fletcher, 2-0. Eric was on classic UR, and when he led on Lotus, Dib, I topdecked my one maindeck Maze. Bottles did a lot of work.

So I was 4-0 in the first batch. Over to the second, where I faced three opponents with the same record and one randomly matched one.

Felix Schaub, 2-0. Felix was also on UR and I think I bottled him pretty hard.

Michael Scheffenacker, 2-1. Michael was on 4c Atog with Su-Chis. I think I won the final game by tutoring for Shivan Dragon which was pretty awesome. I didn’t get Vised very much at all.

Guillaume Denoix, 2-0. Another UR opponent. They all sort of blend together. I think Guillaume blamed himself for some small mistake which might have decided the match.

David Holler, 2-0. David was 1-3 in the first batch but he was on Erhnamgeddon, and thus the first white-playing opponent I’d faced all tournament. The games were very close, including one where David resolved an Erhnamgeddon, in response to which I twiddled my Disk, leaving the board completely empty. Then David proceeded to draw a single Mox Ruby as the only mana source the next 10 turns while I attacked him to death with a pair of factories, but it was at least fantastic that both of our decks got to do what they liked once. Both games involved insane Bottle blowouts, I think.

So I somehow managed to 8-0 the opening stage of the tournament. A lot of this has to do with me facing only one white deck, I think. When nobody plays Disenchant of Swords to Plowshares, disks and trolls are almost unkillable. And no The Deck in particular, even if people tell me white-based aggro is a hard matchup too.

On to the top 16, where I cheat against poor Markus Lundqvist because I claimed I got to play first due to finishing higher in the “Swiss”. Apparently that didn’t apply because Dave Firth Bard hadn’t heard of that practice. Luckily, I still lost game 1, so it didn’t matter. Markus was on a sweet Project M-kind of build with a Power Monolith transformative sideboard. However, he chose to transform against my deck, full of counterspells, disks, and elemental blasts. Both sideboarded games were not close at all, and I won 2-1.

Now comes the hard part. I knew I was facing Richard Stebbing on stock UR. The winner of our quarterfinals would face the winner of Florian von Bredow, on a very similar Troll Disco list as me (I think because I based my list on Marc Lanigra’s, and Marc based his on one played by Florian and Leo Bruder, but I might have confused things), and Tobias Mieth, on The Deck. Then Florian lost a close match. I knew I was pretty advantaged against UR, having beaten it three times already, but heavy disadvantaged against The Deck. The winner of the semis against Mieth would then likely play Michael Scheffenacker in the finals. Stebbing is a friend and needed the N00bcon invite, so I didn’t care too much about this match. I was also running low on time, heading into some difficult to schedule times. Am I making excuses? Not at all. I am simply explaining why maybe my heart wasn’t all into this match, as much as it could have been. For example, I didn’t care too much about what kind of board plan I would use. If expecting Blood Moon (since I only had two basic Islands), I should probably leave in 3 disks, but if not, at most 1 since they’re pretty terrible against everything else. As I also had 4 BEBs, since I was afraid of burn, I decided that Stebbing probably wouldn’t have moons.

I lost game 1 quite quickly due to not drawing anything good, if I remember correctly. And then comes the interesting part. I have a Lotus in play, something like 4-5 other mana sources. We’re both on 7 cards, Stebbing having played no land last turn. I pass the turn, hoping he’ll have to play a bolt to my face if he misses on lands. Instead, I could have cracked the lotus and tried to get a troll online, at least trading some blasts and counterspells for his cards. But then he Shatters my Lotus, which i BEB to get mana advantage (I had more blasts and counterspells than mana in hand), and he mana drains back. Then he drops a moon. I have no island or sapphire and get locked out for a long time, and eventually, that does me in. With a better board plan, including appreciating Stebbing cutting all Arabian creatures and thus cutting all my bottles and leaving the disks, I’m fairly certain I could have taken this. But Stebbing is a good player, and I was happy when he later took down the semis and the finals, qualifying for N00bcon. (Although Scheffenacker would of course also be a worthy champion.)

So, then, how good is this deck? Very good, I’d say, even though I never faced The Deck. But slightly weak to Black Vise, as well as white aggro. Not quite tier 1 but not far from it.

And about the list? Twiddle is too cute. I cast it 6 times during the “swiss”: once to untap a disk, once to untap a mana vault at end of turn, twice on a ball lightning, once to untap a troll to block and once to tap down a factory so I could attack for lethal. That’s not enough to warrant it, it’s not worth the cost of a card (shockingly). Another card I thought might be too cute was the Shivan, but that turned out to be awesome. I’m never cutting that. I do need more Shatters, though, and the second Maze should have stayed main. Spell Blast is horrible, and so is Power Sink; I’d rather just run the good counterspells. Sure, Spell Blast is kind of good against white, countering Swords and Disenchant, but not good enough. I’d rather board Flash Counter. I also need a completely different plan against The Deck, and the Mirror Universe wasn’t needed against burn. And I never missed Timetwister, and Recall is very good, to mention some other contented issues. This is what I propose going forward:

I think the mana denial plan should be better against The Deck, and the mana base is stronger as well. Right now, I have no plans to run this back within the immediate future, but who knows. It is kind of fun to play.

Now my train is approaching Arvika and tomorrow’s Festivalen tournament. Stay tuned for a report from that one further down the road. Play old cards, drink fresh beer. Be happy. Cheers.

4 thoughts on “Trolling the Winter Derby”