(Editor’s note: The latter parts of this report was written under increasing levels of intoxication.)

I should have known better. We’ve been here before.

It’s so much better now: I play both Icy Manipulator and Relic Barrier, making Howling Mine actively good almost every time. And true, that was not the problem. There are others, though. Tons of them. But I’m getting ahead of myself.

Last week, I was in Hannover, playing in the Appetite for Destruction tournament, the German N00bcon qualifier, co-hosted by Florian von Bredow and Marc Lanigra. Flight, Schiphol, beer, hotel, you know the drill. Suffice to say that Florian picked me up at the airport and had booked a table for us and some assorted Germans and other accomplices at a nice Indian place. Before that, however, him and I played some games at the airport while waiting for Björn Jonnie to arrive from Stockholm. I was on UWx copy prison for the event and Florian was on a Ubr robots build which I think originally was created by Leo Bruder. At one point, I had almost complete control of the game, drawing 3 cards a turn with a couple of howling mines, while tapping down almost everything Florian had with a winter orb and some icys. But I didn’t draw enough factories to kill him quickly, and I never copied the winter orb for extra protection, so when he managed to land a copy of his own, making a barrier, he could get out of the winter orb lock, switfly killing me with something like a bunch of triskelions, copies and animate deads. And another game, as I didn’t play very many counterspells and the lock was only partial, he EOT hurkyl’d me into a mind twist for 7. Not great, Bob. I somewhat solved that with a few more win conditions, like the fourth factory and a titania’s song in place of the strip mine (yeah, I know) and the one kismet I had. At least so I thought. This is what I arrived at:

The event was held at a pirate-themed restaurant, and there were points given out for a number of achievements, like this: 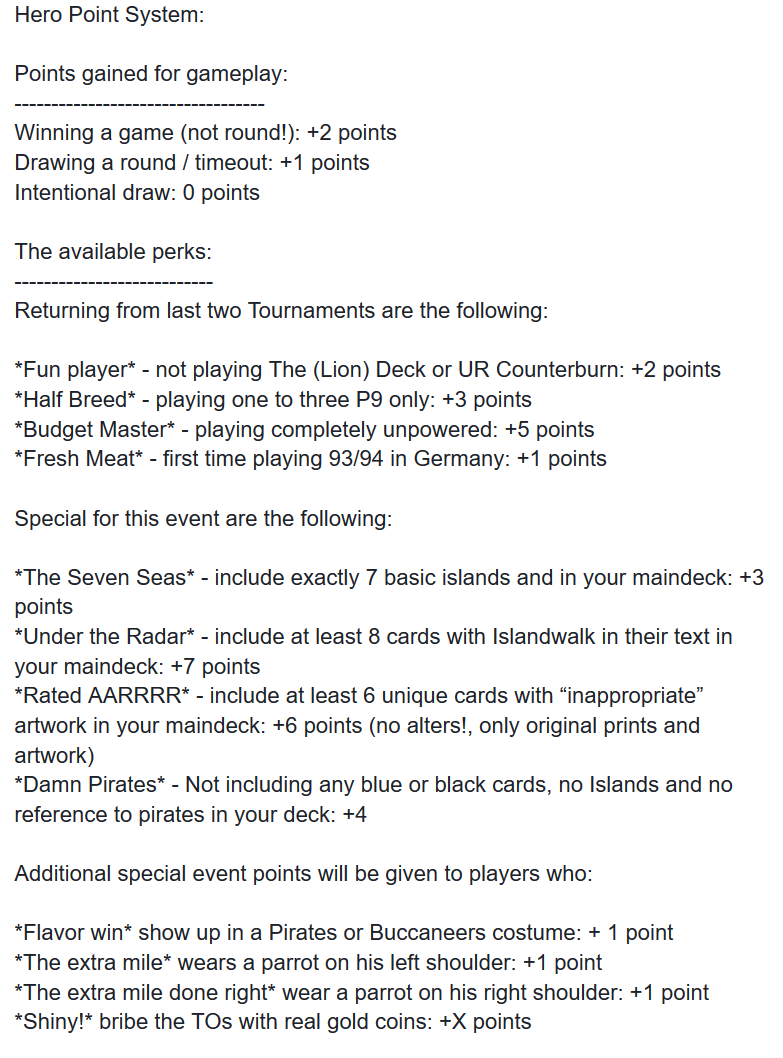 Then, after 5 rounds of swiss, the point winner got an invite, the tournament winner after a top 4 got an invite, and a third invite was given out randomly among the rest of the players. I chose to ignore the points because I like playing with more of the good cards, and I also already have an invite (from writing posts like this one). The first match, I faced Mari Steinhage, playing Uwg merfolk. I did filthy things to him and won very quickly. Then I faced Florian again, and everything went to hell. He deserved that, though, considering all the brokenness I’ve unleashed upon him over the years. I regularly take multiple turns in a row against him, and that is with playing only one recall, maybe a sylvan, no howlings, etc. We both mulligan, I’m on the draw with a library, 2 disenchants and a white source. Turn 2, when I can draw, I’m facing down two su-chis and a sage, not having any mox, so I can’t even draw, having to disenchant twice in a row, falling to 12 in the process. When Florian then plays a triskelion and has a factory, it’s very quickly over. The next game, I believe I am mind twisted. Alright. The lighting was horrible, I couldn’t see my cards, so I was kind of glad I could escape that place. Also Florian did deserve the win from organizing an awesome tournament. Next up was a good schnitzel luch. After that, and after having traded for a beta ankh of mishra (only need 3 more now. why do I do these things?), I face Peter Monten who I know from some skype games way back, I think. Peter is on RG budget aggro and he crushes me. I mind twist his hand of a couple of factories, making my hand of 2 relic barrier worthless. In the end, my hand is 2 relic barrier, a titania’s song and a recall, having an icy in play and getting killed by a llanowar elves and a scryb sprite or something. About the same thing post sideboard. The lock never materialized and I saw 0 abysses. I mean, there isn’t any real lock as long as i have to tap down creatures as i would need a shit ton of icys. Yeah. Not even with kismet. Fuck this.

then I proceed to annihilate THe Deck never seeing a book. So there’ s that

in the last match, I face Bw midrange where I miss an orb flip (for the second time of the day) on a juzam that proceeds to deal 20 to me. Good times were had.

Fuck prison. I hate this deck. The answeres are too narrow (icy against weeneis, relic barrier against anything), the threats are too (takes forever to win, still vulnurable to a random hurkyl or disenchatn or whatever). Compare to The Deck running counterspells, disenchants (versatile answers), books (versatile threats). These things are good against anything. Prison isn’t working.

There might be a version with Nether Void that can actually lock people out. Especially with hurkyl. But that’s a completely different story. Also not for me, at least not right now.

And then we had nice dinner with an impaled chicken and Florian proceeded to lose the finals because it’d look bad if he won his own tournament, and I had some great games of Ice Age/Alliances constructed with David Chambers’s decks, and we left and went to the Dutch guys’s hotel and had some cognac since apparently nobody in Hannover knows how to serve a decently hoppy beer. And I lost some more with prison. And we got some sleep at last, and another great breakfast, and a tour of the city with Florian, and a late flight home, and the weekend was excellent but I’m never playing prison again. Bye.

One thought on “On not playing pirates in Hannover. For some reason. I don’t get it. Pirates?”