I’ve been playing a bunch of Fork combo lately. Mostly this list, which I played at a small gathering the day before Grand Prix Stockholm this past weekend.

I went 1-3 at the tournament, and I don’t think I won a single game when we were playtesting at Belgobaren over lunch before, so I won’t say much about the individual matches. But the deck is interesting. It started out as Fork Recursion, one of Gordon Andersson’s favourite decks, and one I’ve been itching to try since the unrestriction of Recall. My first stab was in a Mirrorball shell, looking roughly like this: 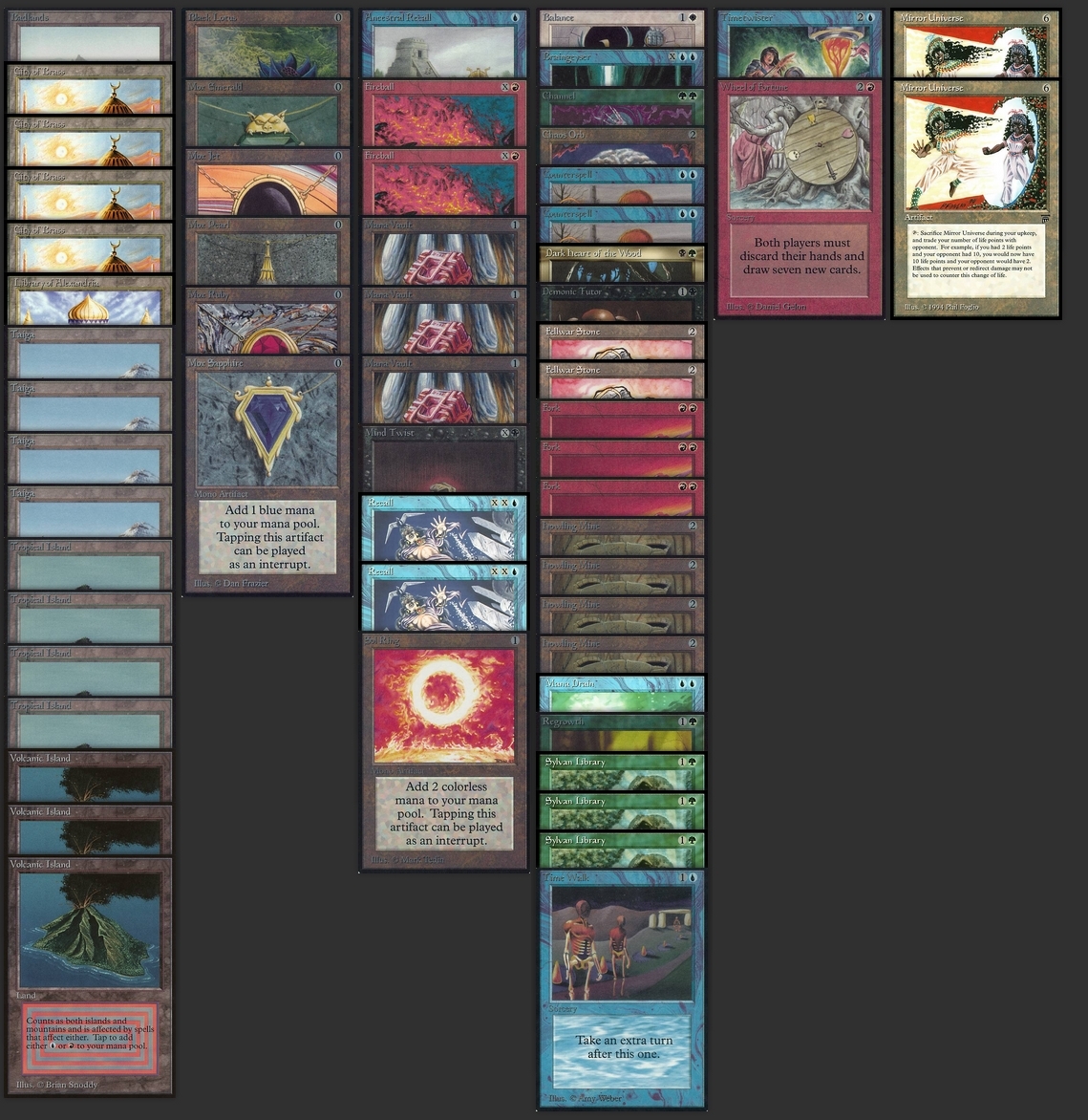 I tested it a small bit, with limited success. It had too little red mana for the Forks, I think, but in the end, it comes down to one thing: I hate Howling Mine. I know, I played it at both Twiddlevault and Atog at The Boat, but in the former it was a (maybe, somewhat) necessary evil, and in the latter mostly a liability, at least in retrospect. It boils down to this:

Yeah. Fuck that card. So I wanted to try to build the Fork engine without having to play as many naked Howlings and getting them destroyed. If you play four copies of the card, there will be situations when you just have to jam it and hope. And Relic Barriers just don’t belong in combo decks. Sure, you can tap mana artifacts too, and that makes Mana Short much more of a plan post-board, but it’s so hard to find the slots. I did consider it for Twiddlevault and will continue to do so in the future but I have no high hopes there. Rather, I was looking into other ways of building resources in your time walk turns. One idea I’ve been toying with is going heavy on Transmute and Copy Artifact, so you can search for your one or two copies of Howling Mine when you need them and then copy them a bunch of times. Another thing is regular books, although Jayemdae is very expensive, especially when you have Fork + Time Walk instead of Twiddle + Time Vault. Multiple books is out of the question. Sylvan is still good, of course. Bazaar isn’t bad, but you still need some way of getting actually ahead on resources. (And the additional problem of me not owning any, but those could certainly be borrowed in a tournament and proxied for playtesting.)

So I want to cut some Howlings. Another idea I’ve been keeping in the back of my mind is a Blood Moon-powered combo deck, being heavy red with a bunch of islands, using the Moon to buy time and disrupt control. This should in theory work well with the heavy red mana requirements of the Fork deck. I did something I rarely do: I brewed in physical space. Spreading out the various combo parts I was considering, I went to work. A small Candleflare component could also work here, also defended by Moon making giving opponents mana less dangerous, and allowing for more ways of generating the mana for a large Fireball + Fork. Another option was a small Twiddlevault hybrid package, like a Time Vault and three Twiddles. In the end, what had to go was the disruption. No Counterspells of any kind here besides the Mana Drain.

So what happened? Going off is hard. Sometimes you just never find Time Walk or Demonic Tutor. But there are enough smaller combos to abuse Fork to make that no deal breaker. The mana felt a little bit off, I would have needed 1 or maybe even 2 more Island to support the Blood Moon. I had that initially, but then I felt a bit low on red for Fork. Moons are sometimes great, of course, but maybe they belong only in the board. Speaking of which, I should have more Shivans. Now I never got to board in my sweet Alpha Phantasmal Forces, which are actually not bad against control or non-red midrange, but Shivans are the real deal. Good with Blood Moon and all the acceleration, good against aggro in general, reasonably easy to defend against BEBs with REBs. One Power Sink could have been good, maybe just in the board, as a way to interact more when cutting some of the combo. Maze is laughingly bad with Blood Moon which I should have anticipated. The draw engine seems to work alright when going off. I’d like to take a stab at that Twiddlevault hybrid, I think. Maybe something like this, based on the changes suggested by Mattias Berggren after the tournament: 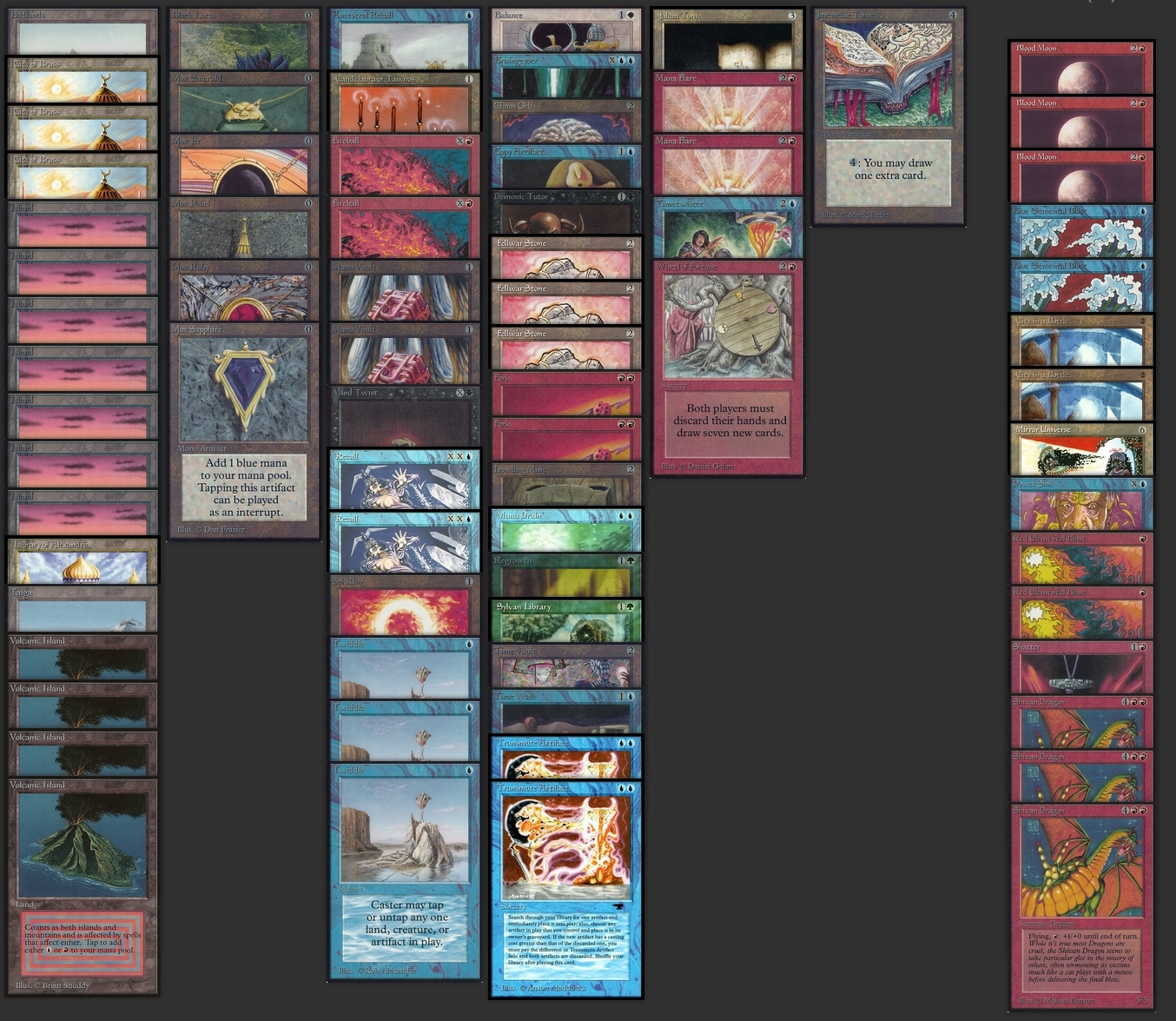 The deck is still no killer. It’s worse than several other combo decks, I think, not to mention the real tier 1 decks like The Deck and Atog. But it’s sure fun. And the raw power level is high. Having access to Blood Moon and City in a Bottle along with the Shivans might mean this has a better board plan than most other combo decks in the format. The main problem is the lack of interaction or threats against real control or highly disruptive decks, like UR with Counterspells and tons of blasts. Especially with the current board. But that’s a gamble maybe worth taking. Another build would probably cut the Candleflare package for Counterspells and try to fit in Mana Short in the board, for example.

Now it’s time to experiment with some Lich, I think. If anything interesting turns up I’ll be sure to write about it. See you around.

3 thoughts on “Failing with Fork”