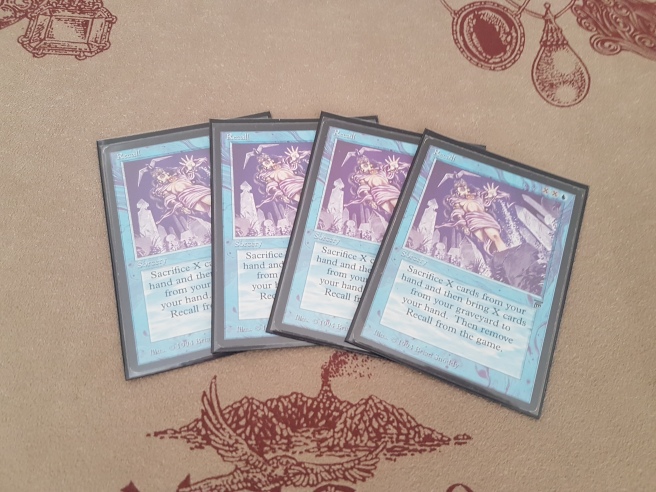 Recall has been unrestricted in the Swedish format for a couple of months now, but there haven’t been many tournament results or even published decklists sporting multiple copies yet. I’m mostly aware of this Instagram post by Danny Friedman and my own report from the Boat. Even missing much data, I think there’s some merit to discussion the correct number of copies of the card in various decks. Specifically, I think a lot of decks used to run Recall since it was on the restricted list, and since it’s there, it should be played, right? And now, you have to instead justify why you want exactly 1, why not 2, or 0? So let’s look at why you would want Recall and why you would not.

So where does this leave us? Recall is definitely good in slow control decks like The Deck. I could even see the correct number be somewhere between 1 and 2 copies, so experimenting with 2 certainly has some merit. However, it is a very bad draw early in the game, and I frequently board it out against red decks anyway (because it’s so bad to play expensive blue spells against Red Elemental Blasts), so for now, at least, I’m sticking to the one copy in my lists. It might also be good in Troll Disco as you have cards like Lightning Bolts against control to discard, a lot of mana, and a lot of restricted cards, often including Wheel of Fortune. The new wave of Land Tax/Ivory Tower decks could also potentially use more than one copy, but that is mostly a thing in EC at this point.

Recursing-based combo decks, like the above-mentioned Twiddlevault lists or Fork Recursion combo, obviously want more than one Recall. In Twiddlevault, I am unsure whether you want 2 or 3, leaning towards the former. Other combo decks, like Powerball, Mirrorball, or Dreams, might benefit from 2 copies, but that is not really a high priority and likely won’t make the cut. In Reanimator, Recall has the additional benefit of being a discard outlet, but Reanimator sucks in 93/94. If there was a format with Recall unrestricted and Fallen Empires legal, maybe?

Then there are decks which should consider cutting Recall altogether, now that it’s less of a given as it’s not restricted anymore. (And should obviously have done so years ago, too, then.) I’m thinking of the old UR Serendib Efreet/Flying Men/8 bolt deck. It doesn’t run too much mana or card draw, so I can imagine cutting Recall here. In general, if you do fair things, you might not want any Recalls at all.

But then again, who wants to do fair things anyway. Right?

(And finally, please tell me if I missed something or if I’m just plain wrong in any respect. There might definitely be decks I haven’t thought of which should play more or less Recalls than currently is the case.)