On December 16th, I went to Stockholm for the Lucia Legends tournament. It was a pretty small local tournament, excellently run by Gordon Andersson, sporting 17 players, but not having played since BSK in early November, I felt the urge to take the 2-hour drive. Also, the last Stockholm N00bcon invite was on the line, to be awarded in some unannounced way. Before sitting down to play, we were faced with a quiz for Legends art: six non-reprinted Legends, and the task was to name them, with their mana cost as tiebreakers. This is the quiz. Take a stab at it! 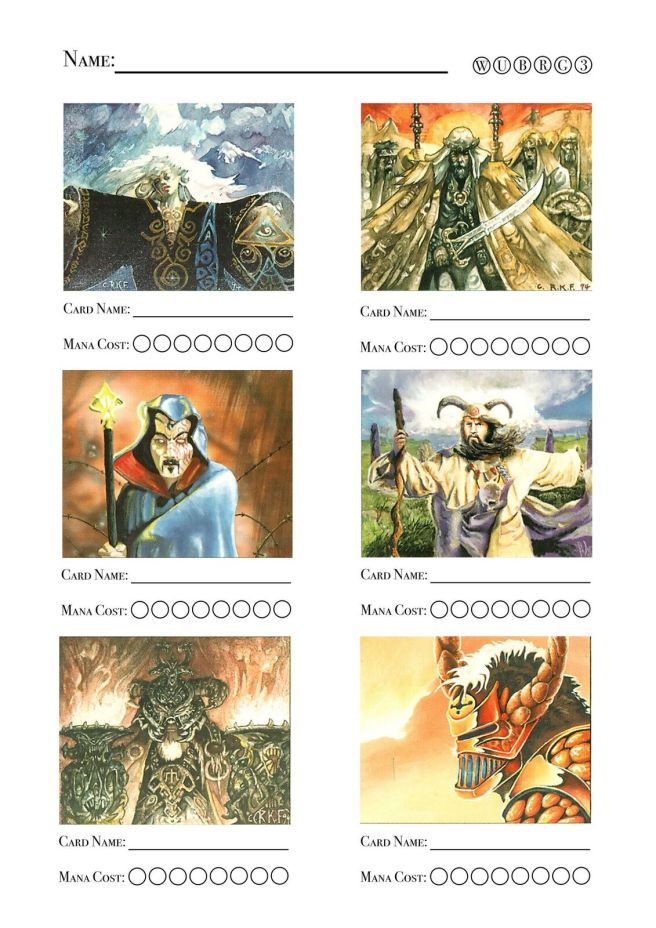 I kicked myself for not remembering the name of a card I actually knew what it did, finally getting it with Jacques le Vert, only to find out it was actually Hazezon Tamar. So I only nailed two of them: Boris Devilboon and Lady of the Mountain. I thought I knew Stangg (it was not announced that it was only non-reprinted cards), but it was really Ur-Drago. How many of them did you nail? Reply in the comments!

Later, before the top 8 started, it was announced that I was indeed in the top 4 of the quiz on a score of 2 out of 6. Kids these days have no sense for history. (Mad props to Jesper who got 5 out of 6!) The next trial was Falling Star flipping, in which I hit two creatures out of the maximum three. Then, it was time for a quiz. Legends trivia quiz.

Anyone remembers the old Question Mark quiz on the mothership? I used to be quite good at that, meaning making top 8 in the world or so, a couple of times. Or the Question Mark live show at Pro Tour when Mark Rosewater still went to them, giving out free packs and promo cards? Those were also sweet. So, it was actually not that fair. There were a few questions I wasn’t 100 % sure on, and so didn’t answer, as a wrong answer was awarded with a negative point, but the ones I answered, I knew. Pretty basic stuff, really; some easy things like where Legends stands in the order of expansions, or how many cards each booster contains, and some slightly harder, like what’s special about the print run. (A version of the full quiz will be up on wak-wak some time in the future, I’ve heared. Keep tuned.) When the dust settled, I had won by a reassuringly large margin, and that N00bCon invite was mine. Sweet stuff indeed!

But before all that happened, we played some magic. Four rounds of swiss before a cut to the top 8, to be exact. I don’t feel like doing a play-by-play report, but I like to discuss the deck I played. It was this pile:

Some highlights: winning on the next-to-last extra turn of time in round 1, where my opponent (my friend Råberg, playing a sweet Enchantress brew) played a lethal fireball with REB backup against my hand of two BEBs, going to 2 in the process so I could finish him with the last card in my hand, a lightning bolt (so I didn’t even need that second BEB, but it felt good anyway). Taking a game off of Egil with the BGW deck in the finals; he had won every duel before that! It was his first tournament, almost, and his deck was built from Gordon’s leftovers. Makes me wonder how he’d do with a real deck. :) Then I misplayed the last game of the finals, throwing a game that was won, but it wasn’t obvious at the time, and it involved a Berserk, a card I would never expect out of a midrange deck with no pump. (Although still bad. The play was likely strictly wrong, no matter which cards were in my opponent’s deck.) That game, I was also hit by an unexpected Tsunami. One of these days I will close it out with a win, I swear.

So what about the deck I played? 5-2 is a reasonable record, and I liked getting to play with my newly-acquired Serendibs, as well as going aggro with burn for the first time in the format for me, but I’m fairly certain the list is just bad. Probably the archetype as well. Why? Well, for a starter let’s take a look at the mana base.

That’s 13 U, 12 W, 9 R, 6 B, excluding the Lotus. Imagine a mana base like that in any modern format. (Reminds me of the time I played UG Madness in Standard to a Top 8 in Nationals without Yavimaya Coasts, having the mana base of 11 Island, 9 Forest, 2 City of Brass.) Too little red, a bit too little blue and white as well. I had even cut the Emerald for another colored source, even though my Serras and Serendibs greatly benefit from acceleration! I should have used more Plateaus instead of Plains, ignoring Blood Moon a bit more, but it’s still far from great. Even if you cut the black, which might be worth it. Basically, the complicated mana bases of this format don’t work if you don’t run Fellwar Stones or possibly if you play a combo deck and can cut the Mishra’s. Also, the Moats aren’t just good enough when there’s so few other valuable Disenchant targets. The red addition might make it better than straight-up UW Skies, as the burn certainly was strong in a lot of games, but this deck is just a straight-up worse version of UR Burn. And one of the fundamental truths of Magic is that you shouldn’t run a worse something else. You could also make a case that it’s also a worse Swords/Disenchant/Counterspell/Moat deck than The Deck, but that part is obvious. The deck might even be worse than the UWR Savannah Lion deck that Åland played at BSK, although I stand by the lions just being a generally terrible card in the format.

Unfortunately, I never got to use Rasputin Dreamweaver, but at least I did grind out Gordon’s Big UR with my Jalum Tome one game of the semifinals, so I got to showcase some of my sweeter cards. The burn was fun to play with, as a change to my usual control- or combo-centric play style, but next time I feel that urge, I’ll do it in another shell. UR, or big UR, or Arabian Aggro. Or even some Underworld Dreams burn deck. I have lots of ideas.

The next tournament for me is probably the Arvika Festivalen in February, but I have a bunch of stuff to write about before then. Something about the decks from Eternal Weekend, probably, as well as reviving Rereading Centurion. Also, there’s Skype playing to be done, decks to be built, cards to be acquired. Take care during the holidays, may you always have Library of Alexandria in your starting hand, and see you at N00bCon! Man, that feels great to say.

9 thoughts on “Russian Skies over Stockholm”